May 01, 2020
As we wave a goodbye to one of the legends in the film industry, Rishi Kapoor, we all know that he will always live within all of his dear fans through his great work and even greater songs! So as we remember Rishi Kapoor, here are the list of few great songs of many which will always keep him immortal within us: 1. Khullam Khula Pyaar Karenge ए, देख वो, इश्क़ छुप-छुप के फ़रमा रहे हैं है, क्या मज़ा, दिल ही दिल में तो घबरा रहे हैं The song was a part of the great suspense thriller movie Khel Khel Mein (1975). This song was a composition of R.D. Burman and the lyrics were given by Gulsan Bawra. To watch click on the link : https://youtu.be/LiU54BxWgp0 2. Hamne Tumko Dekha hamne tumko dekha, tumne hamko dekha aise arey hamne tumko dekha, tumne hamko dekha aise ham tum sanam sato janam milte rahe ho jaise This is another classic romantic song from the movie Khel Khel Mein (1975). Another great composition by the extremely talented R.D. Burman. The song will give you the fine memories of th
Post a Comment
Read more 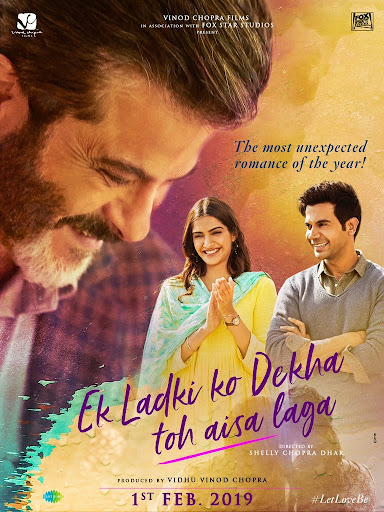 Released on 1st February, 2019. Picture Courtesy: IMDb Movie Name: EK Ladki Ko Dekha Toh Aisa Laga Director: Shelly Chopra Dhar Cast: Sonam Kapoor, Anil Kapoor, Rajkummar Rao Some love stories are not simple! What can your ‘not simple be’? A Hindu girl marrying a Muslim boy? How about a girl being in love with another girl? ‘Ek Ladki Ko Dekha Toh Aisa Laga’ is Shelly’s gift to Bollywood; the first mainstream lesbian love story. The story sets in Punjab where a ‘mard’ is the one who never goes into the kitchen except for setting up the cylinder. Sweety Chaudhary, the daughter of Balwinder Singh is an introvert. The Punjabi house thinks she is in love with a Muslim guy, who banged with her in Delhi. Shahil Mirza is the boy on whom the caretakers of the Chaudhary mansion place their bets on. Will Balbir let her Sweety marry a Muslim Guy? But why does every love story has to be like this? Why does everyone thinks in the same direction? What if Sweety does not have a boyfriend? What if she
Post a Comment
Read more

May 01, 2020
Amidst these trying times, we have Assistant Secretary of Yuva Sena Malad, Mr. Prathamesh Shirke advising his followers to adhere lockdown and #StayHome https://youtu.be/LuVNdYfkMFw
Post a Comment
Read more

May 01, 2020
Speechless … with sudden blows from God …. suddenly he seems to be deprived of entertainment , guess…bringing finest actors to his place …what he doesn't realize is that once they reach him ….we are left deprived forever … one more dream shattered .... Ek khwahish aur adhuri reh gayi !
Post a Comment
Read more

May 01, 2020
Veteran Bollywood actor Rishi Kapoor breathed his last today, at the age of 67. The popular actor had been unwell for a while and was admitted to a hospital in Mumbai. Neetu Kapoor and Ranbir had been constantly by his side. Randhir Kapoor had revealed in a report that Rishi was rushed to the hospital on Wednesday morning. Amitabh Bachchan had shared a post on Twitter expressing grief about his co-star. Rishi Kapoor had been shooting for ‘Sharmaji Namkeen’ in the capital when he fell ill earlier this year and was later shifted to a hospital in Mumbai. Reports suggest that the actor was battling cancer relapse. He was Raj Kapoor's third born, after Randhir and later Ritu Nanda, he was older to Reema Jain and Rajeev Kapoor. In September 2018, Rishi Kapoor and Neetu Singh took off to New York and the veteran actor underwent treatment for cancer close to a year. For a long time the 'Chandni' actor had kept his cancer battle a secret. Speaking about his battle with the Big C in
Post a Comment
Read more

Irrfan Khan, Magnificent Actor, Dies In Mumbai "Surrounded By Family." He Was 53

May 01, 2020
As news of Irrfan Khan's hospitalisation spread on Tuesday evening, the actor's spokesperson released a statement Actor Irrfan Khan died on Wednesday in Mumbai's Kokilaben Dhirubhai Ambani Hospital, where he was being treated for an colon infection. A statement released by his family said that Mr Khan spent his final hours "surrounded by his love, his family for whom he most cared about." Just hours ago, the actor's spokesperson said in a statement that Mr Khan was "still fighting the battle." The Piku star, one of Indian cinema's most respected thespians, battled a tumour for several months and returned to Mumbai some months ago after being treated in London. Irrfan Khan is survived by his wife Sutapa and two sons. Yesterday, his spokesperson confirmed that he had been taken to the intensive care unit and later, dismissed rumours that Irrfan Khan had died. Read the statement released on behalf of Irrfan Khan's family: "I trust, I have s
Post a Comment
Read more
More posts